Evangeline Ordaz Walks the Borders Between Art and Community

“I have this passion about really trying to improve the state of affairs for the people who have the least voice and the least power, least whatever,” says Evangeline Ordaz, preparing to open her new play Bordering on Love at Company of Angels.

“So I went to law school to get the tools to come back and make them useful to this community where I was born and spent part of my childhood. And then when I started writing, I really just saw writing and art as another tool.”

Ordaz, an attorney who recently completed four years as vice president and general counsel of the East LA Community Corporation, also writes plays that are so relevant to topical issues that sometimes the plot spoils in just the brief time-frame of rehearsal, causing rewrites after a production has already opened.

“I don’t want to sound like I write agit-prop,” Ordaz is careful to establish, “because I don’t, and I am really adamant that is not something that I am interested in doing. Although I see a use for it, and there is an absolute place for it, but that is not what I want to do. What I want to do is to really entertain; people need to come and have a good time, first and foremost. But I hope that as they’re having a good time, they’re getting fodder for additional thought.”

Ordaz got the idea for Bordering on Love during an exercise in Company of Angels’ writing workshop, where the participants had to create a story based on ads in the Recycler. Those are usually good exercises to spark one’s writing, Ordaz believes, but rarely go farther than the class. In this case, she found her curiosity piqued by three or four ads, including one from an immigration attorney and another from a banquet hall seeking renters.

She emerged with a play that Xavi Moreno, the company’s producing/marketing director and artist in his own right, describes as a “platonic love comedy with a drag queen chorus.”

In the story, Latina stylist Marilu takes her platonic friend Anthony “to the next level of competitiveness in the drag queen pageant world by helping him to be more of who he really is,” Moreno says. Meanwhile, “Marilu struggles to come to terms with the fact that almost every action she takes in this country is criminalized” because of her immigration status — her inability to be who she really is. Both of the main characters have marriage on the mind — but while Marilu might attain legal status by marrying Anthony, Anthony is unable to marry the man he loves.

All of this is set in Atlanta, or a “fantasy Atlanta,” in Moreno’s words.

“When I started this play,” relates Ordaz, “ there was gay marriage in California, for that brief period, and then there wasn’t. So I want to acknowledge where we’re at as a society right now and try to grapple with that….IÂ read in the paper this morning that Montana was trying to amend the constitution to prevent a marriage so that even the courts couldn’t allow it. So it is still something that this country is going to be grappling with in a huge way for a long time, I think.”

It takes much more than relevant subject matter to cultivate an audience, however, and Ordaz understands that another key to Company of Angels’ success lies in its passion and its community roots.

She has been the president of the Company of Angels board of directors for the last five years, so it’s no surprise that she praises the company’s local emphasis. On its website, the company touts itself as a place “where Angelenos see themselves.”Â  She contends that larger “regional theaters tend to be identified with the national audience and aren’t really that concerned with reflecting their geographic location.” Company of Angels, by contrast, takes the attitude that “we’re going to pretend like New York doesn’t even exist, and we’re just going to focus on things that concern here; who are the audiences here?

Groups of students from Occidental, USC and other surrounding colleges obtain tickets to Company of Angels’ shows. Ordaz says the professors are excited to bring their students to an affordable theater where they can see original plays that aren’t at the regional theaters. Those relationships create a following for an already historic theater company.

“Also, I have to say, that the outreach is really who’s on the stage,” she continues. “It starts with who’s on the stage, and it’s word of mouth. Now with social media, that’s a lot easier, but it’s really just the staff being so grounded in the community. Xavi [Moreno] is just everywhere and he’s amazing. He’s got a social network that I think a regional theater would kill for. It works because he’s so passionate and he inspires passion in his friends, who inspire passion in their friends, and it’s really just about that passion.”Â  Moreno was recently selected to be one of the highlighted Young Leaders of Color (YLC) at the national TCG Conference, June 16-18.

The passion that Moreno puts into the marketing and that she puts into her plays is mirrored by fellow artists Armando Molina (director of Bordering on Love, co-artistic director of Company of Angels and also married to Ordaz), as well as producer and actor Richard Azurdia, says Ordaz: Â “They live to do theater, they live to produce it, they live to talk about it, they live to direct it. Passion is infectious.”

LA residents outside the theater world attend their shows because of their connections to the artists, who work within their own communities, Ordaz says. “It’s really organizing, right? The basis of organizing is relationships. You have to establish the relationships. So we have people working in Company of Angels who have relationships, deep relationships into the communities they come from. The Latino gay community refer to themselves as familia, so Ricardo Bracho plays are consistently sold out, because he’s got these amazing roots in the Latino gay community here in Los Angeles. We [at Company of Angels] don’t have to do traditional theater outreach because we’re grounded, and we bring that grounding onto the stage. “

For most theaters, a major barrier is simply getting people through the door, and with regional theaters typically producing “one Latina play a year,“ Ordaz finds their actual outreach to that play’s audience is minimal. “And then if it doesn’t break box office records, they think, oh well, those audiences aren’t really out there, or they don’t really come to the theater. But what happens is when you only do one play a year, people don’t get into the habit of going. So people may think that’s an interesting play to go to, but because they haven’t been to the theater there before, or they haven’t been for a couple of years, they’re not really up on the infrastructure of how to get tickets. It’s not part of the way that they live their life, so that’s really been a blockage. I don’t think you build a theater community by doing one play a year. I think that’s one of the barriers.”

“Lucky” is how Ordaz describes many of the opportunities she has received. TCG’s American Theatre magazine profiled Ordaz and Tucson’s Borderlands Theater in 2006, for which she is very grateful because “not all playwrights get that kind of exposure.” Commissioned by Borderlands founder and producing director Barclay Goldsmith, Ordaz wrote a play about the Arizona immigration situation. She traced immigrants’ steps as part of her research. With the help of the Samaritan Patrol, a group formed from people of many faiths who walk the border to give medical aid to those who need it, Ordaz traveled with them in the early morning hours, slept through the hottest part of their days and traveled again in the cooler late afternoon.

The play’s story came directly from the desert, she remembers. “It’s almost like I felt spirits or voices of the people who had walked. It was weird, because we were walking these paths, and I just got this image of a man and a woman, a couple, making this trek and fighting. You know how couples usually fight when they’re doing something stressful? Well, this is a very stressful thing and they’re probably fighting the whole way. And then I just got this flash of – I don’t think the husband makes it. So that was just the spark for them and the whole rest of the story.” That story became her play Visitor’s Guide to Arivaca (Map Not to Scale), also produced at Company of Angels after its workshop in Tucson. Adding to her self-titled string of luck, the Denver Center of the Performing Arts commissioned her work after seeing that American Theatre article in 2006.

Ordaz wrote most of Bordering on Love during nine months when she was a participant in Center Theatre Group’s 2009 Writers’ Workshop. However, as much as she feels lucky and supported, Ordaz also acknowledges and fights against the “huge decrease in the amount of play development support, and there aren’t as many ways as there used to be, for developing playwrights, especially non-traditional playwrights. I’m a totally non-traditional playwright. I’m Mexican-American, I’m a woman. Sometimes I think people look at you and tend to pigeonhole you and think that you won’t appeal to their broader audience.

“There just aren’t the [Gordon Davidson-era, ethnic-specific] labs at the Taper or South Coast’s Hispanic Playwrights Project anymore that are really specifically incubating that. And even when they existed, I don’t know how well they were really able to incubate people to actual regional theater status — and that’s really where you make your money, because I don’t make money being a playwright.”

Community within LA theater is very meaningful and inspirational for Ordaz’s writing. “Company of Angels really created the space for me to work. It’s really hard as a writer to get perspective on your own work. So being able to participate in a writer’s group, both at Company of Angels and at the Taper for those nine months, was essential to getting perspective on what I was doing. You can’t see something that’s this close to you, right? So you need people to mirror it back to you.“

Then you need a theater to produce your script and build relationships so there is an audience to see it. For Ordaz that theater is Company of Angels.

Bordering On Love, produced by Richard Azurdia and Xavi Moreno, in previews, opening June 4. Runs Fridays and Saturdays at 8 p.m. and Sundays at 7 p.m. through July 2. Â Preview tickets are priced at $10 and regular performances at $20. Senior, student and group discounts are also available. 213-489-3703. Tickets can be purchased online at companyofangels.org. Company of Angels is located on the 3rd Floor of the Historic Alexandria Hotel, at 5th and Spring. 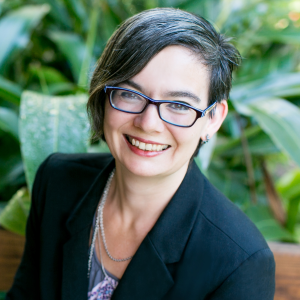